The barangay is the basic level of governance or political unit that exists only in the Philippines. It serves as the primary planning and implementing unit of government policies, plans, programs, projects, and activities in the community. Recognizing their role as duty-bearers, Rex Education and the Center for Local Governance and Professional Development, Inc. (CLGPD) created the Edukampyon Local Governance Webinar Series. 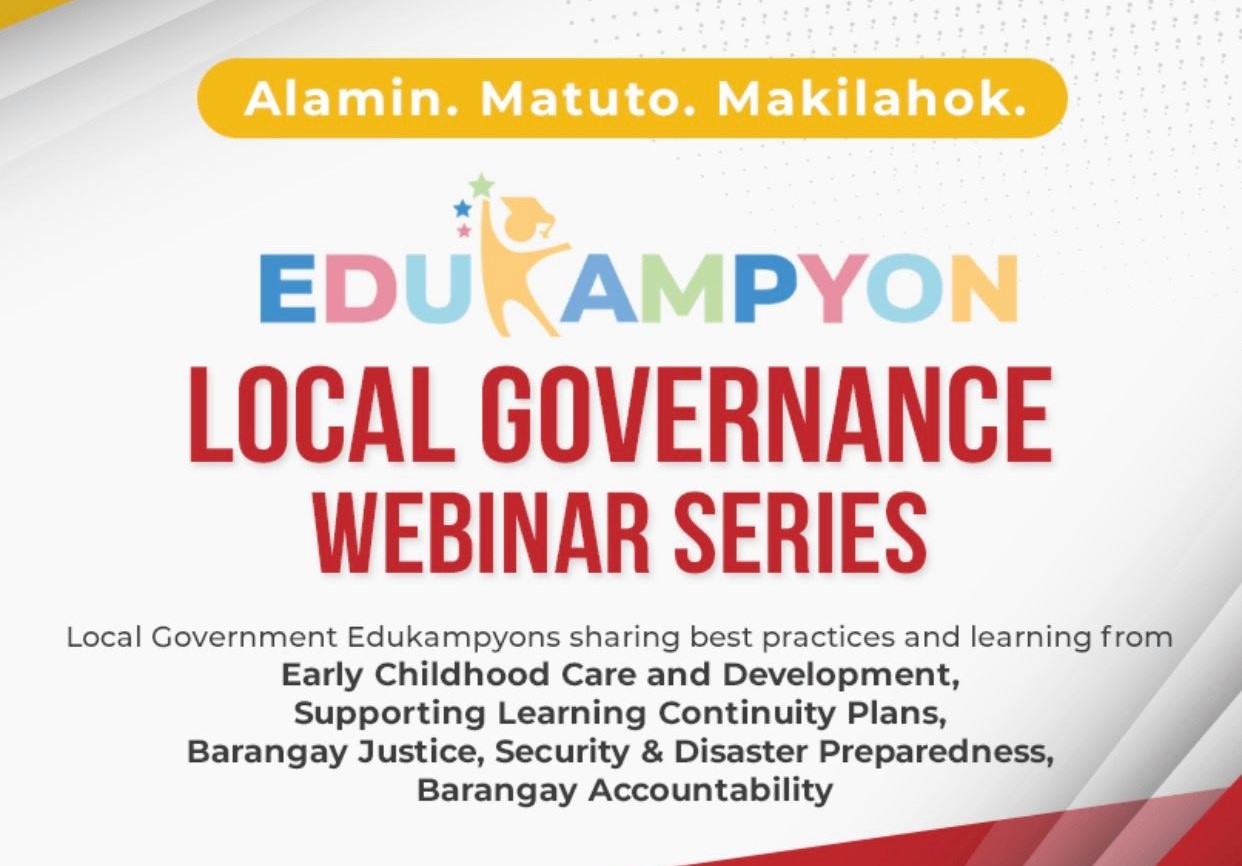 With the call, “Alamin. Matuto. Makilahok,” the webinar series focused on helping barangay officials and local government units (LGUs) in deepening their understanding of their roles as public servants.

“What we aim for everyone to see is how policies and guidance from the top levels of our government are implemented on the ground with help and assistance from our local governments. What we want to leave behind with everyone is hope, borne of the realization that there are champions of education much closer to your homes, and that you too, can become champions of education,” said REX Education Chief Executive Officer Don Timothy Buhain during his opening message for one of the webinar episodes.

The webinar series is anchored on REX Education’s Edukampyon agenda: to champion education and help create an environment where every lifelong learner is healthy, safe, engaged, supported, challenged, and values-oriented. It also values the essential role of duty-bearers from various communities as Edukampyon themselves and contributors to nation-building.

This is where the critical role of the government comes in, as barangays and LGUs share in this task of championing education. As a partner in lifelong learning, REX Education provides platforms like the Edukampyon Local Governance Webinar Series to further push and ignite the passion for service of the nation’s servant-leaders, from the top to the grassroots, so they can serve their communities better. 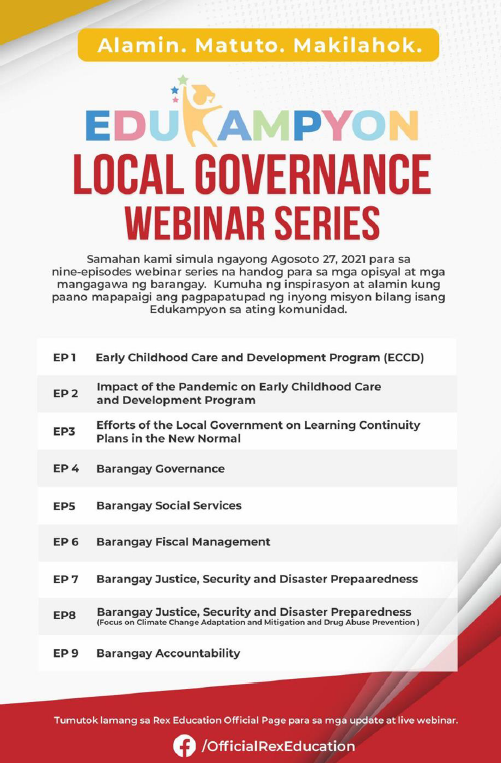 This 9-episode series is a campaign to highlight the duties of LGU officials as champions of education. It also serves as an introduction and supporting material to Rex Education’s recent release, the Barangay Handbook on Leadership and Management, which is a set of handbooks covering laws, implementing rules and regulations (IRRs), program activities, and legal opinions for barangay officials to use as references.

Each episode features keynote speakers who shared their expert insights on each topic, including Hon. Epimaco Densing III, undersecretary for operations of the Department of Interior and Local Governance (DILG), who shared his expertise on Barangay Governance and the roles and responsibilities of the barangay officials under the Local Government Code of 1991; Kathrine Joyce Dellosa, medical officer for the Department of Health’s (DOH) Bureau of Local Health Systems and Development, who talked about the barangay framework when it comes to health response; Hon. Tonisito M.C. Umali, undersecretary for the Department of Education’s (DepEd) Legislative Affairs, External Partnerships, and Project Management Service, who covered learning continuity initiatives; Brenda Miranda and Mary Ann Rada of the Bureau of Local Government Finance (BLGF) on fiscal matters and budget management; Cheryl Navarro, disaster risk reduction focal person of the Department of the Interior and Local Government’s (DILG) National Barangay Operations Office; Elenida Del Rosario-Basug, director of the climate change service of the Department of Environment and Natural Resources (DENR); and Atty. Enrique Dela Cruz, Jr., municipal councilor of Baliuag, Bulacan and lecturer at the University of the Philippines National College of Public Administration and Governance.

Each episode also includes experiences and best practices shared by different barangay exemplars, to encourage and inspire other barangays and LGUs.

The Barangay Handbook on Leadership and Management is available at Rex Bookstore branches nationwide or through orders@rexestore.com.

Special CAMON 18 Bundles Plus Huge Discounts From TECNO Mobile To Look Forward To On 11.11